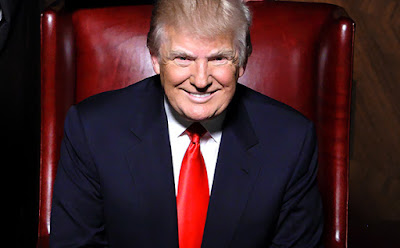 Ladies and gentlemen...grinning his Satanic grin, The Donald!

I am a Democrat, yet fascinated by Donald Trump. Not as a fan, but as someone who keeps anticipating the inevitable meltdown, when his candidacy for the Republican nomination finally explodes. It hasn’t happened yet, which has surprised almost everyone who watches politics. Especially me. Trump can be devilish, and yet his followers forgive him. He has insulted Hispanics, women (including one from Fox News, which should be promoting him, not trying to counter his attacks), and naturally, other politicians. He even called Senator John McCain a “loser” for being captured by the North Vietnamese(1). If there is a line one does not cross, that is probably it. It caused a lot of controversy, but the other feature of Trump’s is his refusal, or inability, to apologize for anything he says. His crowd loves him for it.

Last week he called the husband of Hillary Clinton’s aide, Huma Abedin, a “perv” — the “perv” being former Congressman Anthony Weiner, who sent pictures of his private parts to women. It cost Weiner his job. I cannot imagine anyone else but Trump saying that in the heat of a Presidential campaign. He could think it, but to say it out loud takes a shoot-from-the-lip type of personality. Once words leave his mouth, no matter how outrageous, he defends them. When he said that Fox News’ Megyn Kelly was “bleeding from her eyes or wherever” he defended it by saying it was a common expression. Well, a common expression no one else but Trump has ever heard, but he did not back down from what he said.

How then to account for his popularity? Some of it is his celebrity. He appeared for a long time on television. That is really enough to give him credibility to a lot of people. People who are on television have gotten some sort of golden ticket from the public. Think of all the publicity the Kardashians get. I can’t think of one thing that should make them famous except that they are on television (and have big butts, but by saying that I am moving into Trump territory).

Here is what surprises me the most. Trump, who is a businessman, a purported billionaire — and someone with a reputation for trophy wives (three so far), should have people coming out of the woodwork to tell tales of his business dealings, or his love life, or things he did when he was in school. They did at least two out of the three to Mitt Romney, also a successful businessman. With Romney, the love life, or any kinds of extra-marital business, they could skip. Trump, I am not so sure. He has a thing for young, beautiful women, and with his wealth and fame he can attract them. I would bet he has some dealings with individual women that would cause someone who was wronged by him to come forth and tell the world.

But if and when those things happened (and I have no inside information), either business or pleasure gone wrong, if The Donald was sued, his lawyers would be smart enough to have anyone Trump has paid off sign non-disclosure agreements. Women coming forward a few years ago with stories about Godfather Pizza’s former CEO, Herman Cain, were enough to scuttle his campaign. So far if there are women out there with stories about Trump we haven’t heard from them. They may have been gagged by Trump’s attorneys.

Pictures of Trump and Il Duce, Benito Mussolini, look correct shown together. I detect similar characteristics, not just facially, but in attitude and possible personality issues.

I believe Trump has a personality disorder; he may be a narcissist. He may feel that the presidency is his destiny. He may believe that no matter what he says or does the public will support him. I am surprised that so far no one has really proved him wrong.

Coming into this campaign cycle we have more Republican candidates than we can shake an elephant’s trunk at. Yet none of them, including candidates who were presumptive favorites before Trump entered the race, Chris Christie and Jeb Bush(2), seem to be unable to keep up with Trump in the polls. Bush sounds especially desperate. He has had to go on the attack against Trump, recently claiming that Trump is “not a conservative.” Of course not. Trump is neither conservative nor liberal. He is just a loudmouth with no filter, who loudly proclaims in a hyperbolic manner. I was amused when he said he would deport all illegal immigrants. I have the same answer to that fantasy as I do to those who think Obama will confiscate all the guns in America: there is not an army big enough to pick up all the guns, or deport all the illegals in this country. That is something that is said to play to a base of his fans. Say the most outrageous thing to get people talking, or that plays to their fears or prejudices. It has worked since time immemorial.

Finally, the September 7, 2015 New Yorker has an article on the demise of Atlantic City, NJ(3), and Trump is part of the story. A couple of the quotes struck me, because they show me how at least a couple of his employees saw him. Author Nick Paumgarten quotes Dawn Inglin, a cocktail waitress, who described her former boss with adoration: “When he was there, it was tip-top. You’d’ve thought he was the Messiah.” Another former employee, Kip Brown, who once bussed tables at the Showboat Casino, described an uglier side: “When Donald and Ivana [Trump’s first wife](4) came to the casino, the bosses would order all the black people off the floor . . . it was the eighties, I was a teen-ager, but I remember they put us all in the back.” The inference from his description is telling.


(1)Trump was a “Fortunate Son,” as in the song by Creedence Clearwater Revival, the rich man’s son who gets out of going to war. Trump had a college deferment, and when it ran out he got a 4-F draft classification for a bone spur in his foot. Which foot, Trump claimed he could not remember.

(2)Do we, as a democratic society, really want to elect a third member of the Bush clan? It smacks of royal succession. I would think two would be enough. Maybe someone should propose a law limiting one family to two presidential candidates in a generation.

(3)“The Death and Life of Atlantic City”

(4)Potential voters seem to have forgotten that Trump and Ivana were divorced after Trump’s affair with Marla Maples (who became the second Mrs. Trump). At the time, people were taking the side of the wife. In the 1990 article, “After the Gold Rush”, from Vanity Fair, Trump told author Marie Brenner, “When a man leaves a woman, especially when it was perceived that he has left for a piece of ass — a good one! — there are 50 percent of the population who will love the woman who was left.” In the article Trump revealed that as far back as 1990 he was thinking of running for President, and also of his admiration for Hitler’s ability with propaganda.